Every Monday since October, I've wished I had the energy of Don Sergio Castro, my polymathic 73 year-old companion. For over 50 years, he's helped those in need in Chiapas, Mexico almost every day of every week -- for free. He started by treating and vaccinating animals in the Lacandon jungle (his education is in agriculture and animal husbandry), moved to creating clean water systems and schools (25+ so far), and now lives in our small city in Chiapas, where he treats burns and wounds (while still helping communities with water and school building needs, as funding allows). 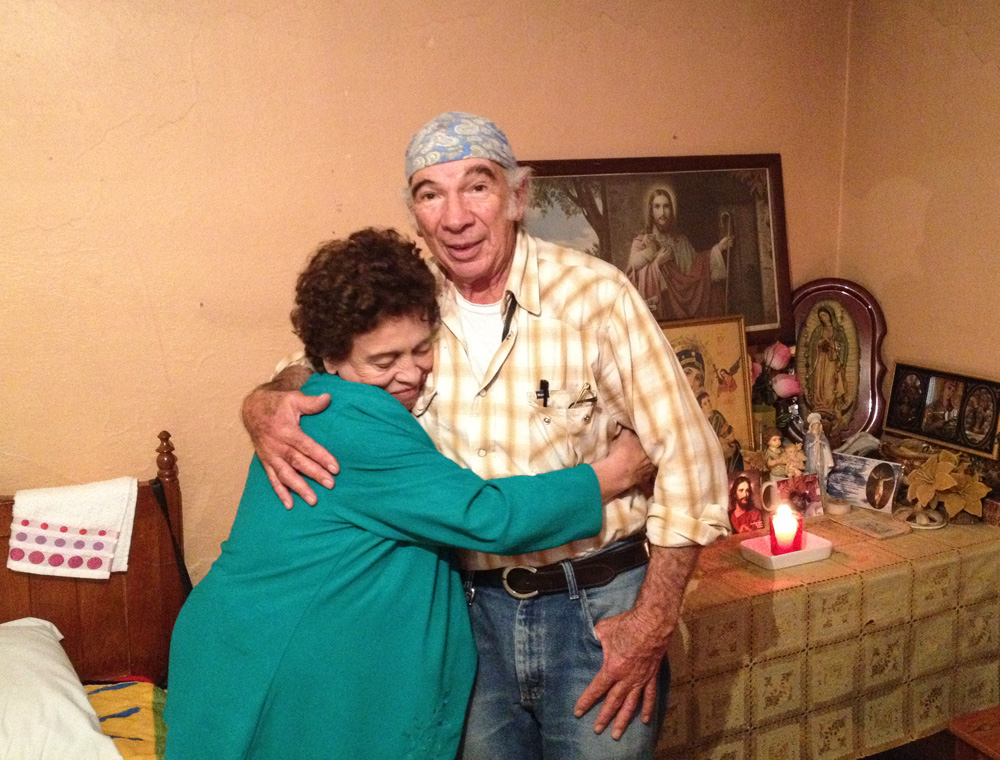 One of Don Sergio's many grateful patients.

I drive Don Sergio in our van on his housecalls to patients around--and up to 30 minutes away from--the city. He never charges anyone for his treatments (and won't even accept a handful of pesos when offered) because he believes that if you charge patients, they won't heal well. He has said, "You shouldn't make money from people's suffering." He sees evidence that the spirit with which he approaches his work really does matter, and I've heard this backed up by a number of patients who are refugees from the local hospital where they feel they are treated poorly, don't receive follow-up care and end up with post-operative infections, etc.  In thanks, some patients will give him bottles of Coke, a bag of fruits and vegetables, or a stack of tortillas. This philosophy means his patients are eternally grateful and that he often runs short of medical supplies.

Don Sergio's daily work rhythm involves roughly 12 hour days from 8am-8pm in which he tends to as many as 25 patients. He usually treats 4-5 patients in his clinic in the morning before leaving to go on house calls, after which he breaks for a meal at home with his family. After returning to his clinic mid-afternoon, another 10-12 patients will drop in, as well as occasional tourist or student groups who want a tour of his museum. (These tours are also often interrupted by patients who drop by his clinic.) Sometimes the tour groups donate to support his healthcare work, but there are many fewer visitors than in previous years (that is, prior to the swine flu epidemic, drug wars, and economic downturn).

Throughout his long work days, Don Sergio displays a never-ending desire to protect others and a lack of patience with those who threaten others' safety.  He never fails to warn me about looming low doorways or traffic hazards (blind turns, potholes)---both of which are ubiquitous in Mexico. So far I've emerged unscathed except for the time I scraped the side of our car on a telephone pole last week. Some of the rare times I've seen Don Sergio show his impatience has been with cars and pedestrians who get in our way while we're driving between housecalls. "Apurate!" he'll say, slapping the side of our car door. How dare that pinche guy slow us down...! Then we'll arrive at patients' homes, and he is calling people "linda" and "mama" and saying, "don't worry, there's no rush." 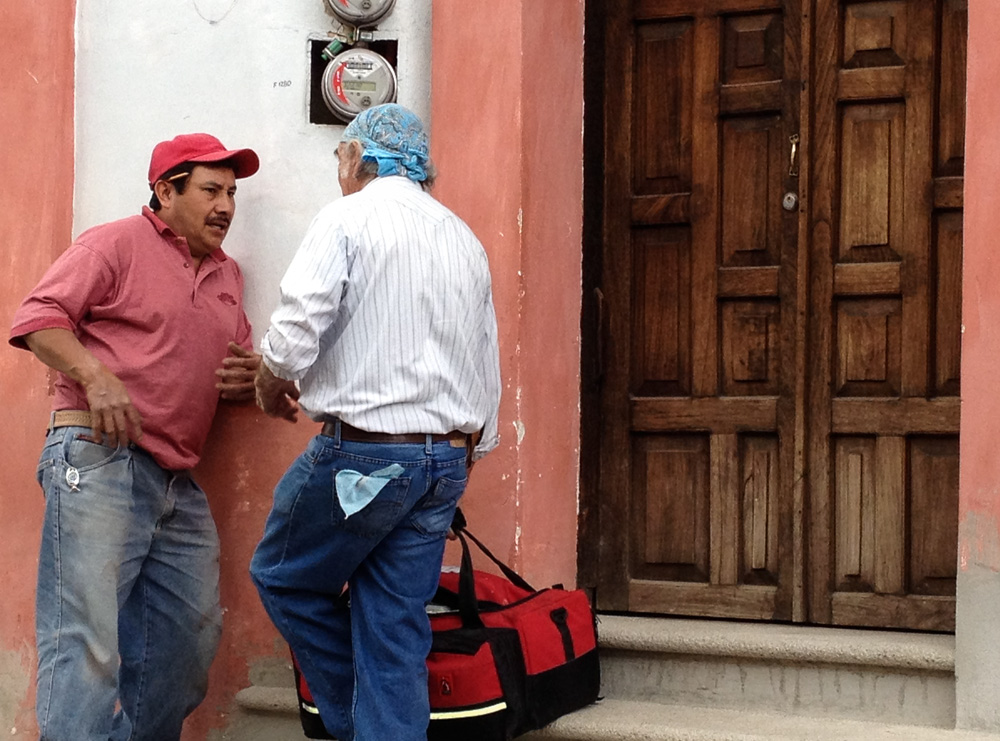 Kirstin and I first met Don Sergio on one of our earlier visits to San Cristobal, as we toured his museum/collection of indigenous clothing. The clothing came to him over many years, as gifts from past patients; the little museum now serves as a small source of support for his healthcare projects. His tour was fascinating and full of insights into the relationships between our indigenous Mayan neighbors and the more contemporary Mexican culture. During it all he demonstrated some of the different Mayan languages (he speaks 5) and amazingly he can give the tour in Spanish, English, French or Italian -- you pick. He is a linguistic genius, having picked up these languages completely on his own.

When we moved on to the last room in his museum, we saw documentation of the burn and wound care he's provided for many decades. (He doesn't mention it at all during his presentations of the clothing.) That is when we realized why Don Sergio is such a saintly character for the many injured poor around San Cristobal.  There is a wealth of photographic evidence of his seemingly miraculous treatments of burns and wounds he effects with his painstaking wound care -- injuries that require many visits each week for weeks to months (up to 1/2 year for the most injured) in their homes or his clinic. Often the hospitals will suggest amputation for injuries he can fix, but only with much more time and care than they're willing to offer. He is a creative and indefatigable caregiver who often has to cope with malnourished, diabetic patients with his often-short supply of creams, bandages and latex gloves. (I've worked with him on days when he has to reuse his last pair of gloves with several patients, cleaning them with alcohol or other sanitizer in between visits.) The patients live in challenging conditions, even if they are healthy, but know a real caregiver when they meet him....

Many of Don Sergio's patients are burn victims, their injuries a result of fireworks, industrial electrical accidents in home businesses, and cooking fires in and outside the home. There are additional dangers caused by epilepsy, which here is sometimes caused by infected pork. (In fact, this is a frequent cause of the burns: seizures cause people to fall into their cooking fires.) And of course, many accidents could be prevented, if only there were better safety measures. (Just the other day, Don Sergio pointed out a young guy doing some welding, his ladder leaning a few feet away from a live electricity wire....) 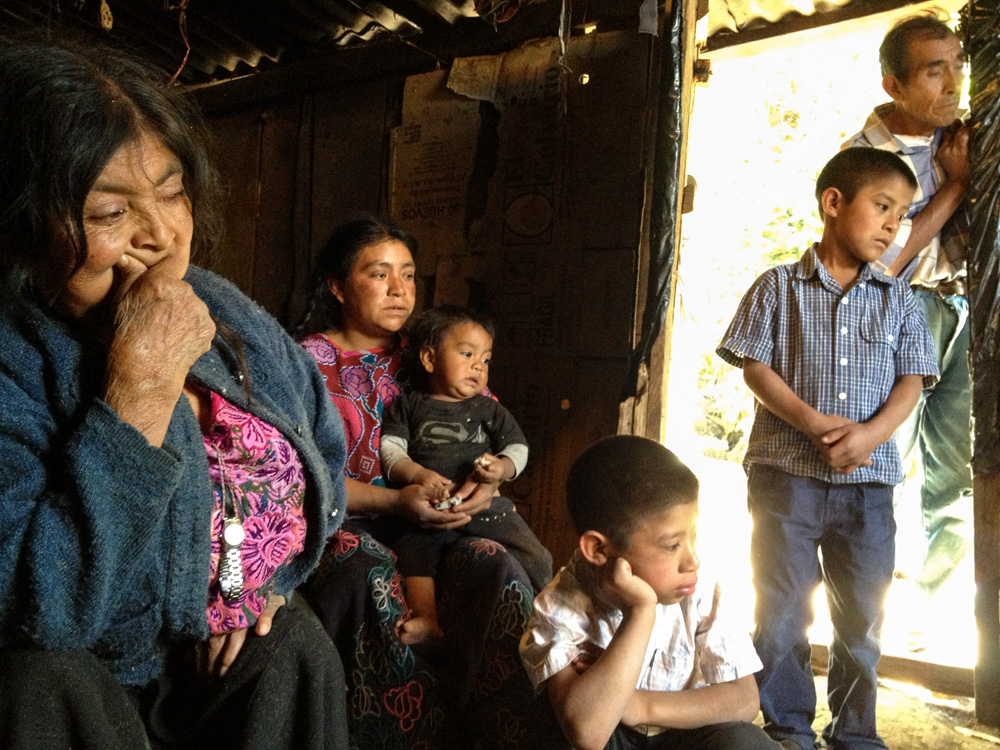 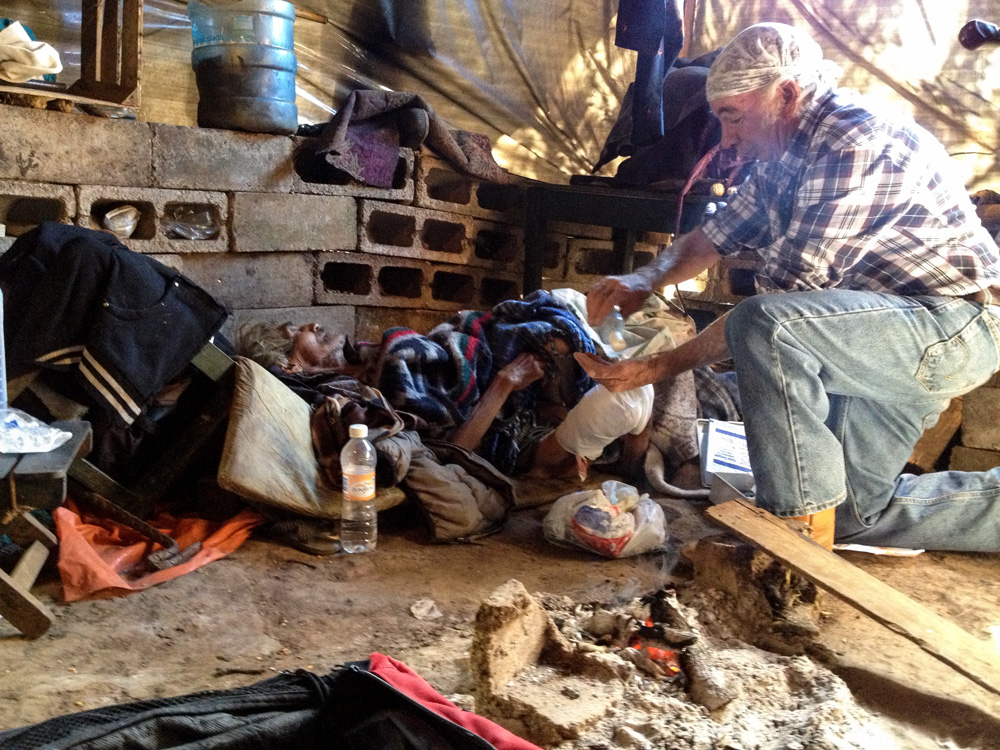 This family was mourning the impending loss of a sweet, sweet man who lived in this simple house
with his family. He had untreated tumor on his leg, that Don Sergio re-dressed every week for months.

Recently, we have been seeing more wounds from pressure ulcers and poor post-surgical wound care at the local hospital -- as well as the increasing number of diabetic infections which are so slow to heal. And there are the usual motorcycle accidents, machete goof-ups,  and (even) infected cat scratches. 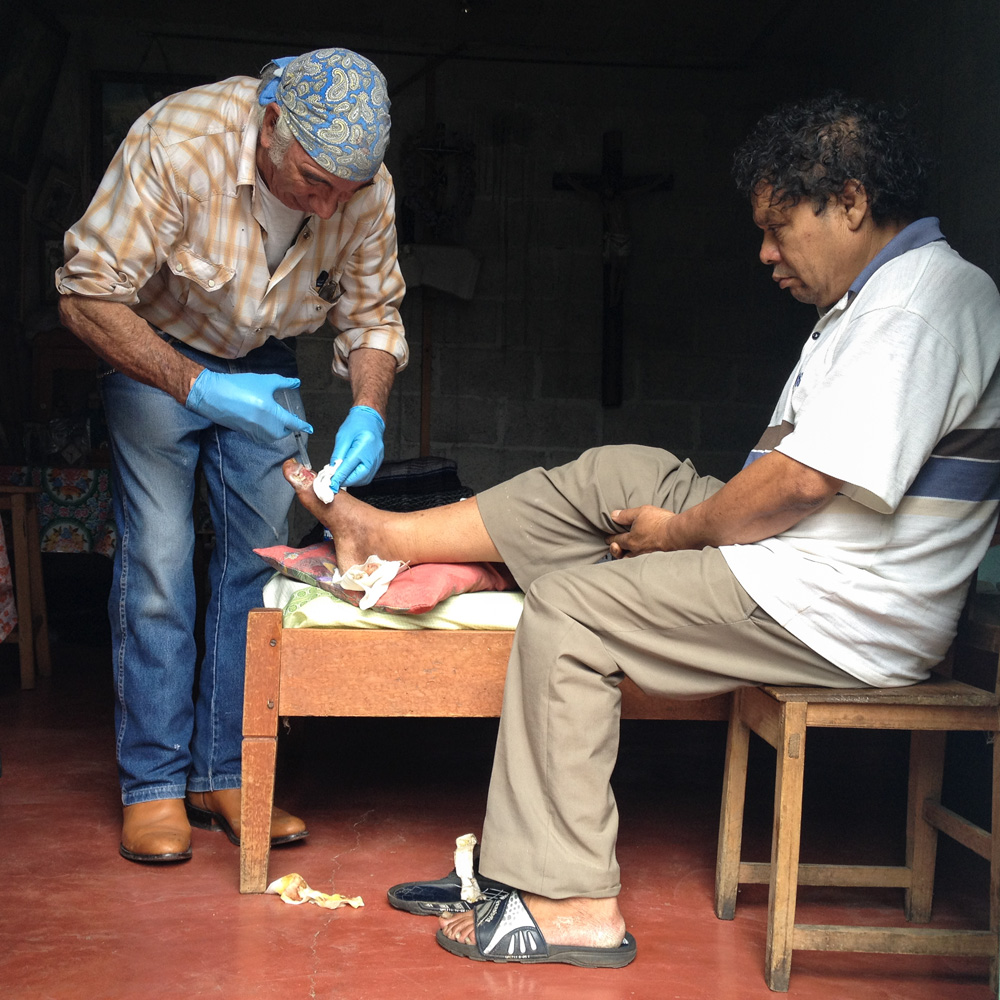 Don Sergio's support is worldwide, though not constant. Among his many supporters are an American woman who now lives in San Miguel de Allende and helps in many ways; a physician's assistant in Tucson, AZ, who works with him every year (and also created his website and sends supplies); film makers who created the wonderful documentary, El Andalon, and many other individuals who bring supplies when they can. (Our friends and family have kindly "sponsored" and ferried supplies, and recently I met a Frenchman who I met who visits every year...and I know there are many people who have been inspired, as we have been, to support Don Sergio's work here in Chiapas.)  If you're interested in more information or would like to order the fascinating video about him, look below. 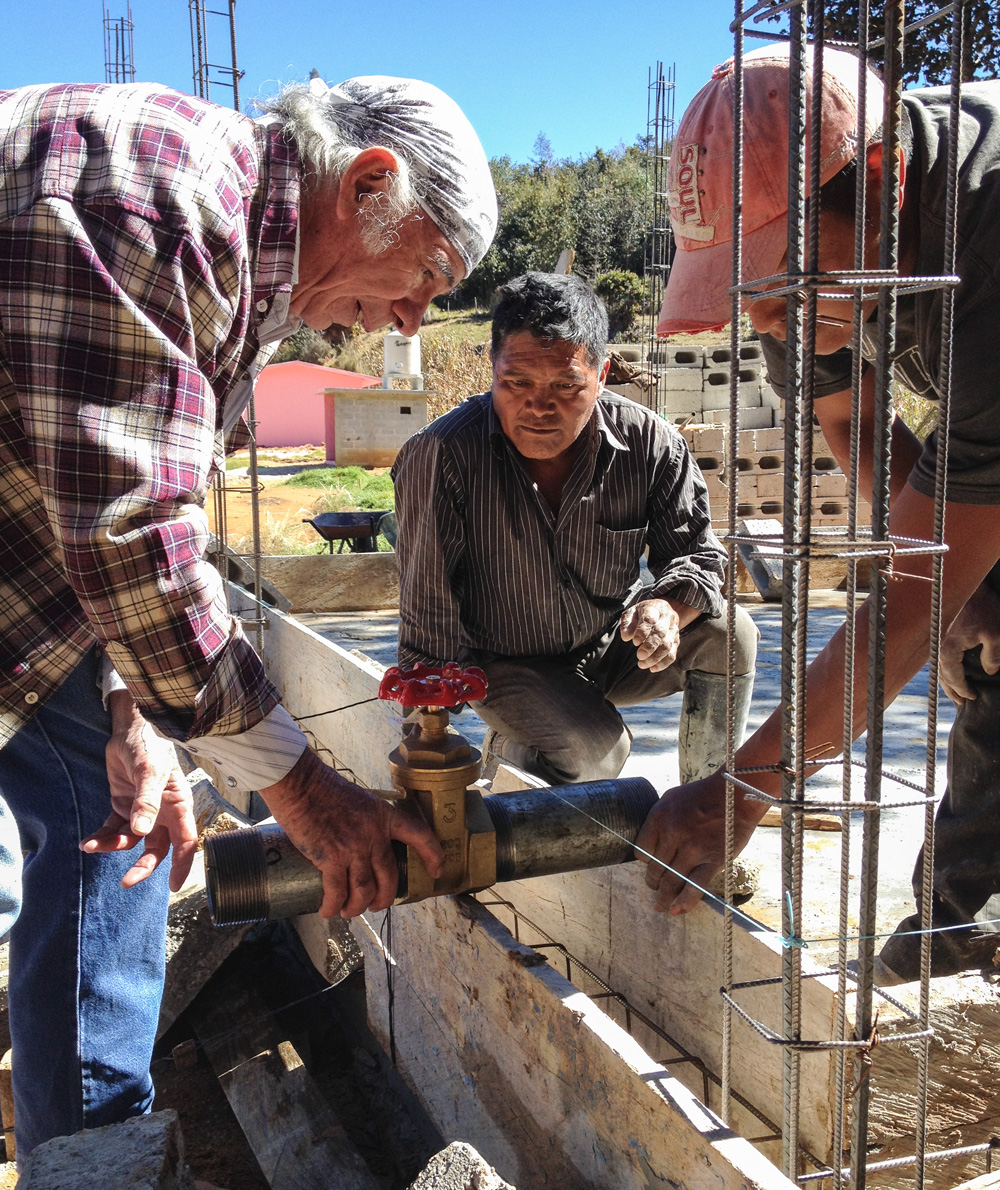 
His website with links to El Andalon:   http://www.yokchij.org/
A blog from a medical perspective:       http://sergiocastrosc.blogspot.mx

With the help of some American volunteers and filmmakers he even has some Facebook representation:
https://www.facebook.com/pages/el-andalón-a-documentary-film/117044141666022 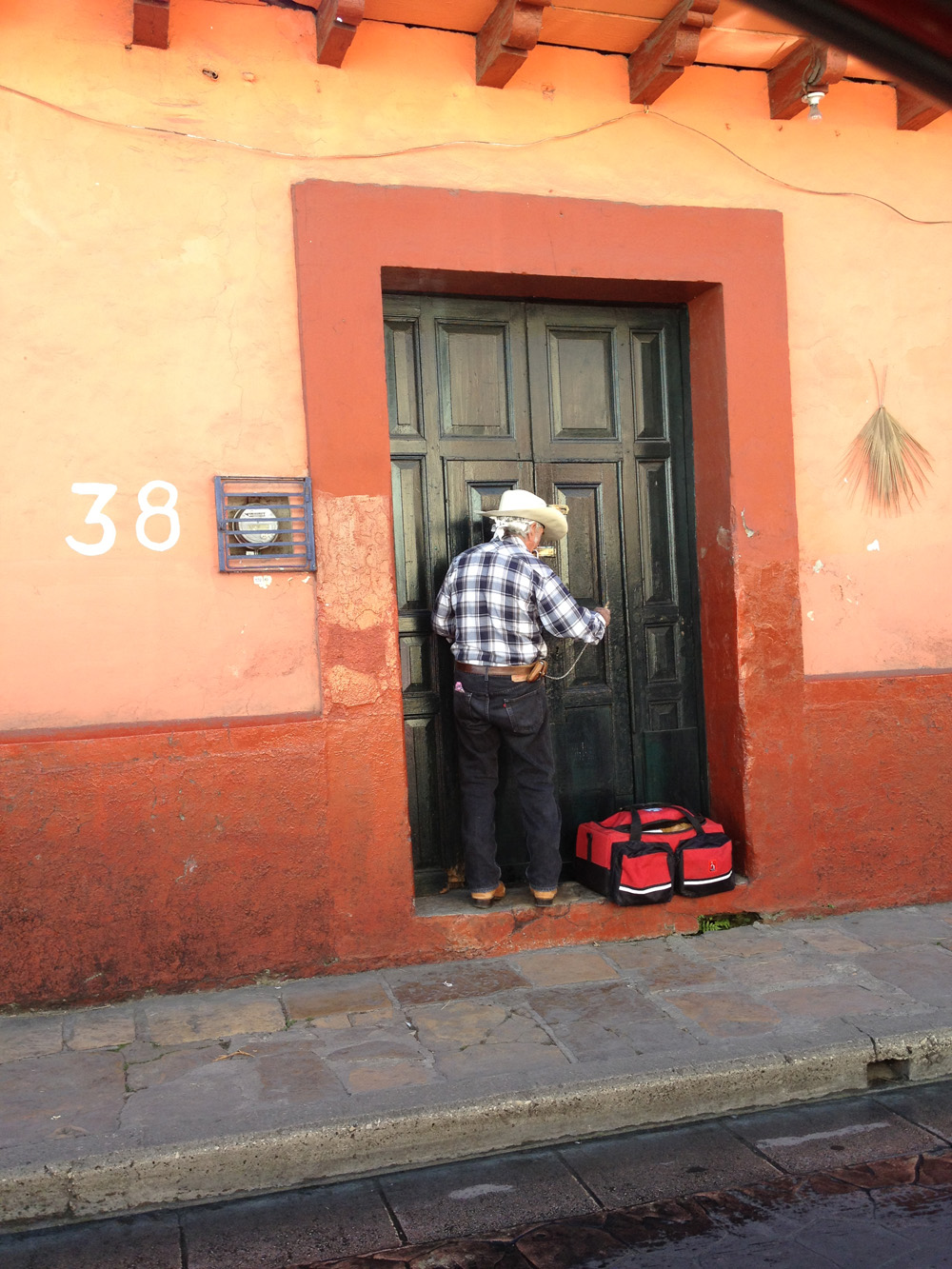 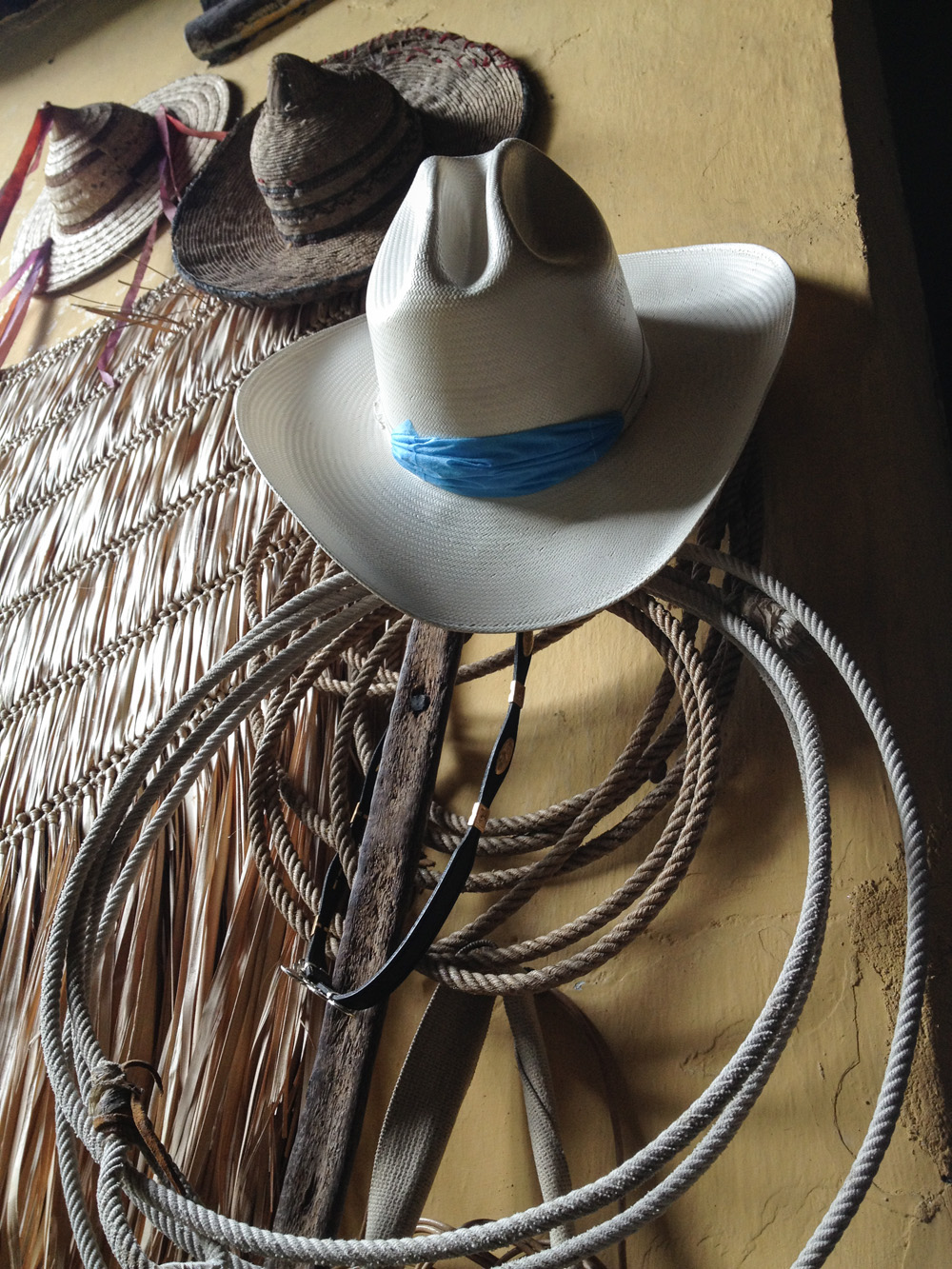 The simple outside and charming inside of his museo and clinic. 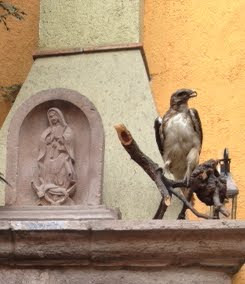